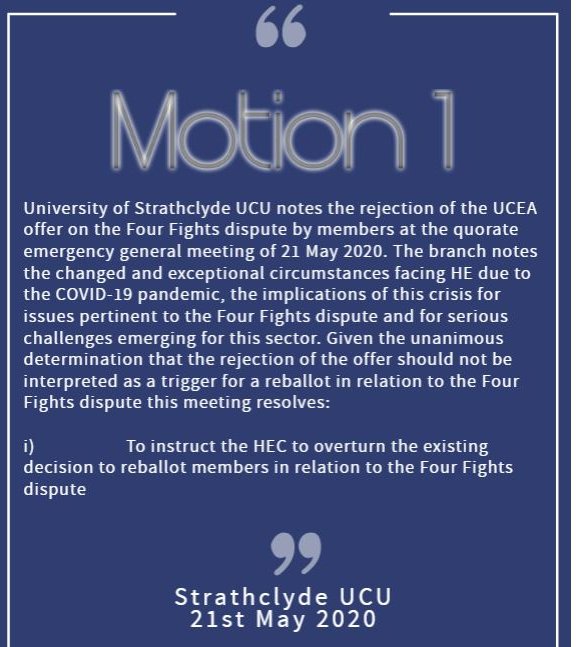 Several branches have today (Friday 22 May) voted to reject the employers’ offer in the ‘Four Fights’ dispute on pay and equalities and to revisit the situation in the autumn. Sheffield, KCL, UCL, Goldsmiths, Leeds, Queen Mary, Lancaster, Ulster and Strathclyde (that we know of) all decided that the offer was nowhere near sufficient but also that it wasn’t the right time to pursue a ballot in June. Both Goldsmiths and Queen Mary also called on the General Secretary to hold a “national meeting for members and representatives along the lines of the recent, highly successful mass meetings by the National Educators Union” with QM calling on HEC to “launch a national campaign in response to the mass redundancies threatened by university management”. We also link below to some important motions including one from Liverpool on a Joint Union Campus Campaign around Covid-19 (which adopts our manifesto) another from Strathclyde and finally Queen Mary’s great motion on a “Post Covid Settlement”.

The COVID-19 pandemic has created a climate of uncertainty across the Higher Education sector. This crisis has highlighted the flaws in a marketised model of Higher Education that has emphasised revenue over the working and learning conditions of staff and students creating widespread precarity and inequality.

This Branch notes the work of the ‘The New Assault on Universities: A Manifesto for Resistance in COVID Times’ and believes such a manifesto can act as the basis for transforming universities into institutions that prioritise the interests of staff and students over profit and managerial vanity projects.

This Branch believes that the response to this crisis does not have to include threats to jobs or an undermining of our working conditions. An alternative is possible.

Therefore this Branch resolves to launch a campaign with the campus unions of UNISON and UNITE to put an end to the failed experiment of marketisation and create a sustainable university. To do this, the joint unions will make the following demands:

To achieve this we demand the University:

This site uses Akismet to reduce spam. Learn how your comment data is processed.